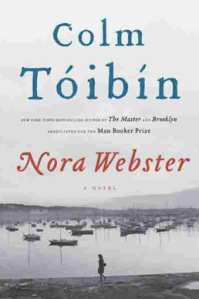 Christmas came a little early to my house this year. Padraic bought me the novel, Nora Webster by Colm Toibin, touting the fact that Toibin has been compared to Henry James — the author of my favorite novel, Portrait of a Lady — in his rendering of female characters. It took me about two days of intensive reading to make my way from front cover to back, and here are my reflections:

I get the Henry James comparison. While Toibin writes in a very simple, declarative style that couldn’t be less similar to James’s sprawling, intricate prose, there’s a subtlety to the narrator’s relationship to his protagonist. In Toibin’s straightforward, unapologetic observations of his central character’s thoughts and actions, we readers experience a sensation of hovering, hugging close to Nora Webster’s every move in an attentive but non-judgmental way. USA Today writes that Toibin “sneak[s] up on readers” which, in retrospect, seems true; suddenly you feel yourself rooting and looking out for Nora Webster without knowing exactly how the author manipulated your sympathies. Looking back, there’s only sentence after sentence of concise, resolute declarations to draw you into Nora’s world. I recall a similar feeling in reading James — it’s hard to pinpoint exactly where the narration turns Isabel Archer into a sympathetic figure.

But I’m getting ahead of myself — Nora Webster is the story of a recently widowed middle-aged woman of Wexford, Ireland, charting her attempt to put back the pieces of her life and maintain normalcy for the sake of her four children. Nora is strikingly honest, independent, and nonconformist, and Toibin makes us privy to her consciousness as she confronts the challenges of her newfound solitude.

Nora’s relationship to her children in the aftermath of her husband’s death is decidedly unsentimental. For example, she confesses to moments of awkwardness with her young sons and struggles to know what to say to her daughter, Fiona. We, the reader, follow her far into her own thoughts while in the presence of her children, which highlights the very individual, internal process of grief that shrouds the interactions of the family.

As Nora settles into her new independence, she accesses a rebellious streak, expressing itself in her decision to join the union at work, regardless of her friendship with the boss, or her open disdain for certain proprieties while visiting her sister — it’s amusing to witness her character flirt with the possibilities for nonconformity, to see her grow into her new role as solitary mistress of her house. But there’s also a weariness about Nora — we sense the struggle it takes to make it through the days and nights, and the sense of resignation that she carries with her, reluctantly giving into the visits of neighbors or the exhortations of “Sister Thomas.”

Perhaps the most memorable, distinct aspect of the novel is that it invites us to watch Nora Webster move through her loss and come out the other side. She takes up singing lessons, finding refuge in music; she takes on house projects, knocking down the fireplace and repainting her living room, finding refuge in the rythms of housework. She purchases new clothes and loses herself in TV movies with her young sons. She returns to the same office where she worked as a young, single woman, and she vacations with her children on the strand. We witness Nora putting one foot in front of the other, and learn to appreciate her resilience. There’s an understated, muted quality to Toibin’s writing, and it’s in the precise, small, mundane steps forward that we witness Nora’s transformation from overwhelmed, grief-stricken widow to a self-possessed mother and worker.