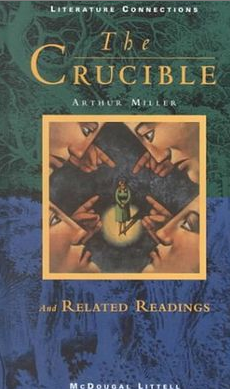 I am reworking the final project for The Crucible. Last year I had my students write a monologue loosely based on one of the characters but they weren’t as interested in writing, much less performing, monologues as I had anticipated. I also like that this project is a bit more rigorous, requiring more writing, research, and MLA formatting. The idea came to me when reading the “related readings” in this version of The Crucible, specifically the essay “Guilt” by Clifford Lindsey Alderman. Most of all, I hope that the choices embedded in the research portion give my students an opportunity to explore issues of social justice that they are passionate about. I know The Crucible is a widely taught text in American high schools, so maybe this assignment idea will serve as “food for thought” for fellow educators.

3. Research and report, how did different members of the local, national, and global, and virtual (internet) community respond in the aftermath of these unjust deaths?

5. Argue, what specific action needs to be taken to recover from these unjust deaths at at an individual level? A local level? A virtual (internet) level? A national level? A global level? (Some of these “levels” may overlap)

6. Cite your sources in MLA format, both in-text citations and a Works Cited page