I am currently traveling — lots of hiking, biking, reveling in Iceland’s beauty marks — but in flight, or in the lull of a long day (the sun sets at midnight here) I am engaging in my favorite form of travel, flying through the pages of a good book.

I decided to dive into some travel writing: “The Best American Travel Writing 2002” edited by Frances Mayes. As Mayes writes in her introduction, “reading and travel have a natural symbiosis” — reading about a variety of foreign adventures while on an adventure of my own puts me in the traveling mindset — a mindset characterized, in my experience, by a closer clinging to the present moment and a mental, as well as physical experience of dislocation that allows for greater self-reflection, spontaneity, and once again, that in-the-moment mindfulness  thing. (Such an elusive and aspirational practice, at least for me, when muddled with to-do lists and daily routines).

Perhaps reading and travel are “symbiotic” in the way that they transform readers and wanderers by first transporting them. And this process of transformation is built upon the liberty, the privilege, of reflection and mindfulness. Mayes seems to draw on this principle in her selections. She writes:

“Early in the process I began to wonder what exactly qualified as travel writing. I am immediately drawn to the incongruous qualities of spontaneity and reflection. I like to read about journeys when the traveler is charged or changed by the place, when the traveler is moved from one psychic space to another during the course of the trip.”

If the highest purpose of travel (and naturally, the mark of good travel writing) is to, however subtly, transform the psyche of the traveler, this Mark Twain quote, also a part of Mayes’s introduction, comments on one way in which travel broadens consciousness:

“Travel is fatal to prejudice, bigotry, and narrow-mindedness.”

So where does 2002’s “Best American Travel Writing” take its reader?

My favorite essay, so far, is Michael Finkel’s “Thirteen Ways of Looking at a Void” originally published in National Geographic Adventure.

It follows a lone traveler piled into a truck driving across “the giant sand sea at the center of the Sahara.” The void itself, the “giant sand sea,” is fascinating — its disorienting quality attracts an eclectic group of passengers, from a drunk to a widow to an American named Beth who just wants “to feel the wind in her face,” provokes reactions ranging from bliss to terror, and serves as an ever-shifting landscape of haunting, unpredictable beauty. Finkel writes:

“Many of the tourists are on spiritual quests. They live hectic lives, and they want a nice dose of nothing — and there is nothing more nothing than the void. The void is so blank that a point-and-shoot camera will often refuse to work, the auto-focus finding nothing to focus on…”

There’s a strong statement about modern society — that Westerners with hectic lives will haul themselves across the Saharan desert just to bliss out on endless sand, to envelop themselves in a place that represents emptiness and nothingness… Finkel continues,

“After a fortnight of wind, Beth came to a profound decision. She said she now realized what her life was missing. She said that the moment she returned home she was quitting her Internet job and opening up her own business. She said she was going to bake apple pies.”

By contrast, “Forty Years in Acapulco” from Men’s Journal chronicles an eighty-nine-year old Polish immigrant named Mort Friedman whose idea of paradise is stalwart routine, reclining by a pool in your finest swimwear at a hotel. This is not travel as self-discovery or spiritual quest but travel as self-affirmation. The routine of “wak[ing] at nine-thirty; putt[ing] on a brand-new bathing ensemble… fly[ing] down on American Airlines on the same date every year” enshrines all of the achievements that earns Mort his yearly trip.

A third essay, “The City and the Pillars,” describes New York’s immediate response to September 11, 2001, emphasizing the instinct of New Yorkers to throw themselves into a daily routines, such as shopping for groceries or cafe owners hosing down sidewalks, in a stubborn protest of the horrific reality of the towers. Adam Gopnik writes,

“The pleasure of living in New York has always been the pleasure of living in both cities at once: the symbolic city of symbolic statements (this is big, I am rich, get me) and the everyday city of necessities, MetroCards and coffee shops and long waits and longer trudges. On the afternoon of that day, the symbolic city, the city that the men in the planes attacked, seemed much less important than the real city, where the people in the towers lived.”

One downside to reading a collection of travel essays, if you’re reading it cover to cover, is that you occasionally get stuck in a destination that you don’t find exciting, or you find yourself a passenger on a journey that wanders a little too long — in my case, “A Rio Runs Through It,” by Rod Davis from The San Antonio Express-News. You’re obviously jolted from place to place, occasionally leaving you with that feeling of the void: there’s too much and therefore nothing to focus on.

So how are my first four or five days in Iceland affecting my psyche?

As much as I appreciate the beauty of the landscape, the density and crispness of the language, and the friendliness of the people, the answer that first comes to mind is that I’m experiencing a renewed appreciation for certain aspects of the U.S.

For example, in a country where most foods, save sea food, have to be imported, and everything but a hot dog is startingly expensive, I appreciate living in a country rich in access to cheap produce (notwithstanding the obvious problems with our agricultural industrial complex).

And as beautiful as the Icelandic landscape is, I find myself reminded of certain remote parts of Montana or Oregon, and feel gratitude for the tremendous diversity of the American landscape, East to West: 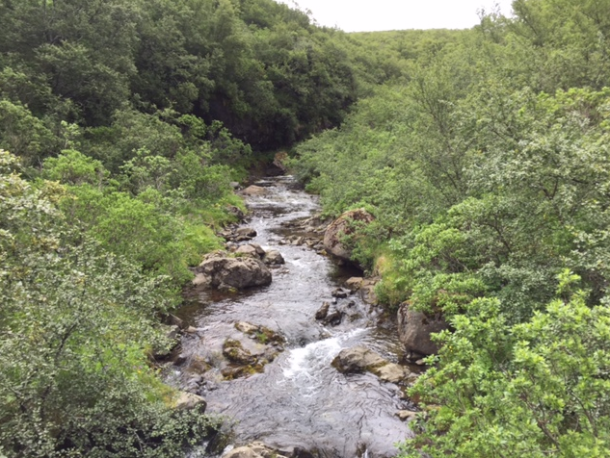 On a more personal level, the gift of time has given me the chance to reflect on the balance between teaching and writing in my life, and how, in an ideal world, I’d like the balance to tilt. Who knows — maybe enough geysers and hot springs and glaciers and waterfalls will convince me that I need to ditch it all and start baking apple pies. I’ll keep you posted 🙂