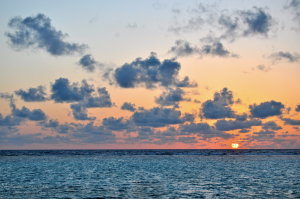 I watched a wonderful documentary a few weeks ago that I hope you’ll consider watching if you have some spare vacation time this week. In The Island President, award-winning cinematographer and director Jon Shenk profiles the urgent environmental agenda of the lowest lying country on Earth: the Maldives, a constellation of 1200 islands scattered below India. A three meter rise in sea level would be enough to obliterate the country’s pristine beaches and Sunni Muslim population. In 2008, the Maldives transitioned from a brutal dictatorship to a democratic government under the leadership of Mohammed Nasheed, and a fascinating parallel is drawn between Nasheed’s rise to the presidency, overcoming a relentless military regime, and his next epic political battle: fighting the imminent threat of climate change. 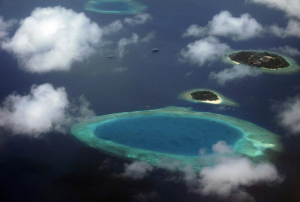 The movie opens with a panoramic view of the Indian ocean, featuring the graceful underwater waves of a coral reef, large circles of land that dissolve into water, a streak of uninterrupted sky, the overlapping of blues, greens, and turquoises from all sides. Such beauty is juxtaposed with a brief history of former President Gayoom’s repressive regime, during which Nasheed and other outspoken government critics were imprisoned and tortured where upscale resorts now stand. After being repeatedly imprisoned, Nasheed went into exile to continue his reform efforts. When the 2004 tsunami hit, decimating whole islands and reducing GDP by 50 percent, he decided to return to the Maldives. In the words of one government official, his much anticipated return would either result in his death or his becoming president. The latter ended up happening. Within weeks of reclaiming his country, Nasheed realized that the most urgent political issues facing the Maldives all revolved around climate change. Beaches were washing away, the fishing industry had stalled, and rising sea levels threatened to take an entire republic — in essence, a civilization — off the map in the foreseeable future. Nasheed’s response was to take the global lead on reducing carbon emissions, vowing that the Maldives would become carbon neutral by 2019. 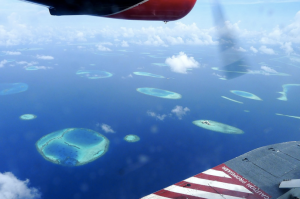 After reconstructing this recent history, the film shifts its focus to Nasheed’s efforts to persuade world leaders that in his words, the “annihilation” of the Maldives is an equally urgent global issue. The camera follows Nasheed’s meetings with the British parliament to his dealings at a New York climate conference — his first trip to the U.S. — capturing many snapshots of the developed and developing world’s complacency. Meanwhile, he adopts strong rhetoric: “if you don’t protect the Maldives today, you cannot protect London tomorrow.” It’s very compelling to watch Nasheed’s team move with heightened awareness of their own mortality through a political process that is as murky and unsympathetic as a tsunami itself. For example, a British journalist cheerfully observes in a radio interview that “you really like a fight, don’t you,” to which Nasheed laughs and points out that he’s fighting for his country’s existence. Another scene shows Nasheed lobbying a British politician who smiles nervously and states that supporting democracy in a Muslim country must be an important priority. During a review of global warming statistics for the Copenhagen summit, Nasheed’s audacity is replaced by a grave silence, but he quickly resolves to enlist the support of India, China, Brazil, and other rapidly developing economies the only way he knows how: by presenting the issue in a “green ribbon cutting” format, in other words, a PR opportunity. 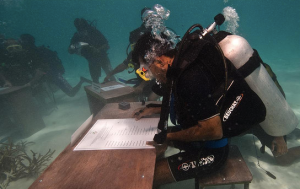 You grow to love this lithe island president, wading into the ocean in a business suit to film public service announcements, conducting underwater cabinet meetings to expose the decrepit state of coral reefs, awkwardly but good-naturedly choking down a hamburger at an American sports bar after a disappointing first day at the New York conference, agreeing wholeheartedly with the London Times headline, “Global Warming like Nazi Invasion.” The Minister of Housing & Environment, Mohamed Aslam, effectively summarizes the unique political situation, or more accurately, apolitical situation of the Maldives: “I don’t even like the word negotiate. With climate, there’s nothing to negotiate.” But of course, the negotiations in Copenhagen are everything, and Nasheed reveals his underlying shrewdness when he makes major concessions to China with the aim of maintaining his country’s VIP status as a climate game-changer. To the disappointment of his delegation, his outspoken idealism gives way to a more calculated approach toward a less tangible outcome: maintaining influence in future talks. 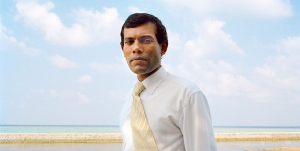 Sadly, Nasheed’s voice is silenced by something far more blunt than the complications of international diplomacy. As noted in the closing credits, he was ousted from power in February 2012 by forces loyal to the former dictator — once again, a reminder that the health of our planet is inextricably linked to that seemingly “dirty” word, politics. In the meantime, I’m inspired to be a little nicer to my patch of the planet this new year.