Words To Drive By Part 4

Landscape: On The Country and The City

The corruption of cities versus the moral superiority of the countryside seems like an outdated, turn of the nineteenth century idea, but it’s one that is convincingly explored in The Art of Travel. The beauty of Yosemite National Park proved the author’s point that “there are concerns that seem indecent when one is in the company of a cliff” (148).

In this chapter, De Botton describes a three-day trip to England’s Lake District, following the footsteps of “a broader historical movement… in which city dwellers… travel in great numbers through the countryside in an attempt to restore health to their bodies and, more important, harmony to their souls” (130).

The Lake District is where William Wordsworth wrote his poems, and by extension, why he wrote his poems, since his poetry mostly praised his natural surroundings. I always thought that poets like Wordsworth got a pass for unbridled, emotional praise of butterflies and sheep and gooseberries; I assumed such flowery adulation didn’t seem “soft” in a more romantic era, but according to de Botton, Wordsworth was mocked pretty harshly for his overflowing love notes “To a Butterfly,” “To a Skylark,” “To The Daisy.”

Wordsworth was equal parts philosopher and poet, meaning that his poetry stemmed from a deep-seated, arguably non-Western belief in the importance of nature to human happiness. He thought cities made people self-centered and isolated, too focused on the social hierarchy and so eager for novelty that their broader, truer sense of interconnectedness was dwarfed. In addition, he viewed plants and animals as “paragons of stoicism,” and thus morally instructive to human beings.

1. Exhausted in the city 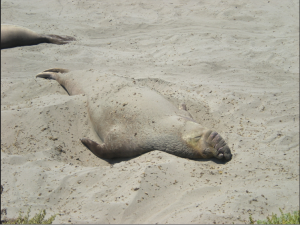 As this guy flapped his flanks with sand and let out deep, gutteral groans, these headlines, among many others, made news back home:

The contrast makes this idea, quoted from a nineteenth century book about Wordsworth,  rather charming: