A Place At The Table 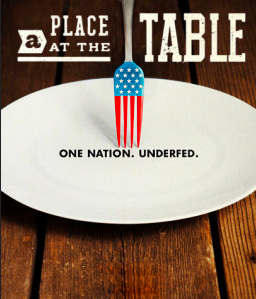 I recently watched A Place At The Table, a follow-up documentary to the critically acclaimed Food Inc. This next installation puts a human, American face on food insecurity, piecing together the different causes and manifestations of hunger in the United States.

Sadly, the terms food desert and food insecurity are familiar to most people now. Nonetheless, the filmmakers document the wide-ranging extent of these realities to set the scene: convenience stores are the closest thing to grocery stores in parts of West Philly and rural Mississippi. The source of tomorrow’s meal worries a single mother with a full time job and an extended family living together in rural Colorado. I was surprised to learn the extent to which federal agricultural legislation perpetuates this cycle of hunger.

The face of hunger takes many forms: Barbie is a single mother living in Philadelphia. She is shown boiling spaghetti with her two, pre-school age children, explaining that she has recently been laid off and is supporting her family on food stamps. On public transportation, it takes Barbie a total of two hours to buy fresh groceries. She describes her own vivid memories of sphagettios and ramen noodles, and her determination to prevent these memories for her children.

Meanwhile, a mild mannered second grader named Tremonica climbs onto the examining table of a local clinic in rural Mississippi. The lack of accessible, healthy food is affecting her weight. Her teacher is later shown exhibiting “a honeydew melon,” inviting her students to call out adjectives. Tremonica is shown cautiously biting into a juicy slice.

Rosie is a sixth grader living in rural Colorado. It recently came to her teacher’s attention that Rosie’s academic and behavior struggles were caused by hunger. Rosie says that she sometimes sees a banana in place of her teacher. She seems sensitive, excitable, and lonely. Members of her extended family juggle various part-time jobs; they share a messy household. She gives the cameras a tour, complaining about the clutter, then shares her getaway spot in the woods.

How did we mire ourselves in a situation where “honeydew melon” is a novelty and factory-made spaghettios are spilling off our shelves? It’s not that I have disdain for spaghettios. On the other hand, I can’t tolerate people who only eat organic, grass fed chicken.

Essentially, our government subsidizes food that is making us sick. By allowing packaged foods to be made very cheaply from refined, processed corn products and strong arming independent-minded farmers, the government makes really nasty, unhealthy, artificial junk available to the poor and limits the availability of fresh produce. In addition to being cheap, this food is very addictive from a biological standpoint. The corruption aspect lies in the fact that most food industry regulators started their careers as agribusiness leaders, CEOs of highly centralized, heavily subsidized farm-to-factory companies.

According to this film, the power of food and agricultural lobbyists rivals that of the NRA. Really, now? The manufacturers of food — basic sustenance — qualify as a “special interest group”?

The film shows a clear cause-and-effect relationship between money, fear, and the U.S. government’s perpetuation of food-related health issues. This is demonstrated by a grieving mother who has lobbied Congress about food safety laws ever since her son’s fatal E. Coli poisoning. After several years, her efforts have not yielded any concrete results. Bound by legal concerns, she minces words with the filmmakers, but her reticence speaks volumes about the power of agribusiness. Meanwhile, a pediatrician and a group of women activists lobby Congress for school lunch funds. Congress “does not have the funds” to spend more than $1.00 per lunch.

The filmmakers also make a compelling argument that food pantries are not a substitute for systemic change to agricultural laws. To do so, the issue needs to have more prominence during election season. In the meantime, you can donate or learn more here: